With political correctness allowing fifth column march amongst usunhindered, this was taken a step further by the group “Faceless” testing security to the house that makes the rules in Canberra – the predictable result achieved.

So what are you going to do about this silent invasion of Australia ably assisted by your parliament?

Protesters of the ‘Faceless’ group

A group of men wearing a Ku Klux Klan outfit, a motorbike helmet and a Muslim niqab have tried to enter Parliament House in Canberra to argue in favour of a nationwide ban on the burqa.

They were met by a security official outside the building, who advised the men that the helmet and the KKK hat were not allowed inside.

He told the protester wearing the niqab that his face would have to be revealed during the normal security screening process.

The media was unable to witness the security process, but all three men emerged without their head coverings.

“It seems that you’re allowed to wear a full-faced covering into Parliament if you’re a Muslim woman, but no other group is allowed to have that same privilege,” Sergio Redegalli told reporters.

“We, as males, are not allowed to wear any face coverings in Parliament House.”

Under new Parliament House security rules, Muslim women wearing a burqa are allowed inside once they have shown their face at the normal security checkpoint.

Speaker Bronwyn Bishop last week backed down from a plan to force Muslim women wearing the burqa to sit behind glass enclosures when in the parliamentary chamber.

Today’s protest was organised by a group called Faceless. 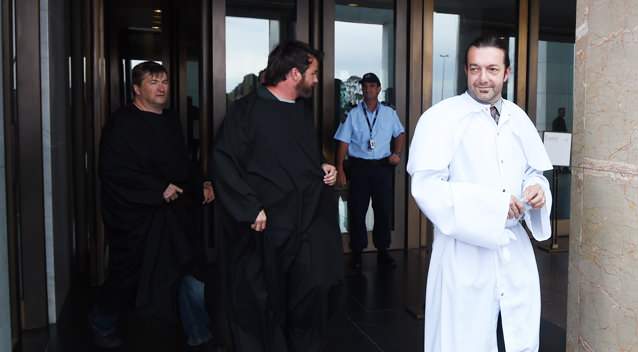 Mr Redegalli said it was “fantastic” that they were not allowed inside the building with facial coverings, but argued it should be applied to everyone.

“The next time, the next group of people that go to any security point to be asked to identify themselves – it may be too late because they’re already in Parliament,” he said.

“No-one should be walking up the [parliamentary] forecourt or in [the] public domain hidden from sight.”

It is not the first time the group has pulled a similar stunt.

In 2012, Faceless members walked through the Sydney CBD to “test security” at various buildings, including the New South Wales Parliament.

A number of federal Coalition MPs – including Liberal senator Cory Bernardi – have been pushing for a ban on the burka inside Parliament House, arguing there are security and identity issues with the facial covering.

In 2011, Senator Bernardi praised Mr Redegalli – who was today wearing the KKK outfit – as a “friend” and someone who has become “an eloquent spokesman for freedom of speech”.

“I happen to agree with Mr Redegalli that the burka has no place in Australia,” Senator Bernardi said in 2011.

“I consider it a security risk and a symbol of repression and Islamic fundamentalism.

“Many Muslims [and opinion polls suggest a vast majority of other Australians] agree with me.”

At the time, Mr Redegalli was under attack for painting a “Say no to burkas” mural on his Sydney glass sculpting studio.

He made clear today that he found the KKK outfit offensive, but said he was wearing it to make a point about facial coverings in public